Elitesports.fun – As we know that Asean Games 2018 event for this year is held in Indonesia, One of the country in the South East Asia. For you information Asean Games is a yearly sport event that held in Asia and will be contested by the country on that region. There is something interesting that happen in Basket Ball Tribune Hall at GBK on Thursday evening.

On that day GBK Basket Ball Tribune Hall is having two NBA player as their guest honor, We can see that Cleveland Clavaries Guard, Jordan Clarkson and Ex NBA player from China, Yao Ming become the guest on A Hall. They are invited to watch the game between Kazakhstan  and Philippine  on that day. 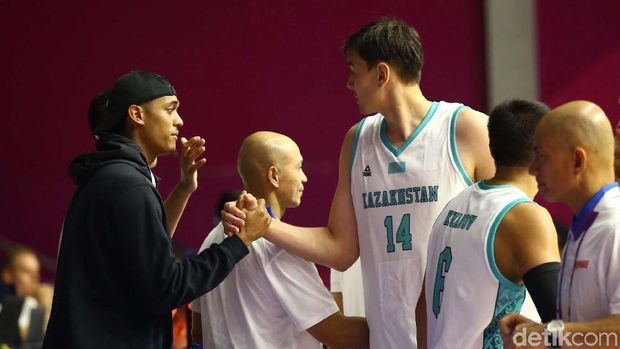 Clarkson and Yao Ming watch that game that win by Philippine with the score 96-59. Yao Ming been there by wearing simple grey t shirt with a short pant. Yao has been in there since the first quarter of the game. Accompany by his friend, the 37 years old guy looks enjoy the game that been show on that day.

But Yao Ming reject to having a picture with a media and also reject to giving a comment  about the game.

At last Yao who is the first player from China that ever play in NBA history looks leaving the tribune when there is only three minutes left on the fourth quarter.

Meanwhile, Jordan who is going there by wearing a training shirt and also black cap not been play on that game. As we know Clarkson is a naturalization player from Philippine that play in NBA. Clarkson now become the member of Philippine Asian Games 2018 player after before not being permitted to play on that event because of the law make by FIBA. After The complain come from Philippine at last he can play for his country.

Let see if we can see he play on that event or not.